THE PRESENT PHASE OF THE OROMO NATIONAL MOVEMENT: CHALLENGES, OPPORTUNITIES, AND ACTION ITEMS

The Oromo Scholars and Professional Group

Realizing the fact that the effort of transitioning the Ethiopian Empire to democracy has been derailed primarily because of the incompetency and ill will of the Abiy Ahmed government, which emerged in 2018 from the EPRDF and later formed the Prosperity Party (PP) to gain political legitimacy without shedding the authoritarian and colonial essence of the former party, the Oromo Liberation Front (OLF) issued a declaration on September 13, 2020. In this declaration the front proposed the formation of an inclusive “national” convention in which all political parties and fronts in the empire as stakeholders would participate in developing a political road map, which would be acceptable to a broad majority of them, to avoid the looming state collapse and the possible emergence of an empire-wide conflict and war, and to ensure the transition to a genuine multinational democracy. Furthermore, the OLF invites international bodies such as the United Nations and its Security Council, the United Nations Human Rights Commission, and regional organizations such as the African Union and the European Union to be actively involved in the process of preventing the danger of state collapse and the total breakdown of the empire resulting in unimaginable human tragedy.

More importantly, the front calls upon all citizens of Oromia in general and independent Oromo political organizations, civic institutions, and professional associations in particular, to initiate the process of forming an Oromia transitional government to protect their society from the emerging political and security crises in Oromia and beyond. The Oromo Scholars and Professionals group believes that two major contradictory processes have started to emerge in Ethiopia and Oromia: 1) the decomposition of the Ethiopian colonial system and its institutional infrastructures such as the nafxanya government and other institutions, and 2) the emergence of progressive forces that are determined to establish a true multinational democracy in the context of federation or confederation, which guarantees national self-determination. Consequently, the Oromo Scholars and Professionals Group concurs with the explanations of the OLF and endorses its declaration.

Because of its abundant economic resources and geographical landmass, the size of its population, and the recent development of the Qeerroo/Qarree movement, which has mobilized the entire Oromo nation to fight against injustices and gross human rights violations, Oromia has become the hotspot of the emerging political contestation between the old and dying forces on one hand and the new and energized political and social movements on the other. Despite facing monumental challenges from its external and internal enemies, the Oromo national movement appears to have embarked on the final phase of its journey toward the long sought national self-determination.  Particularly, the OLF, which  mapped out the ideological and political roadmap of the Oromo nation in the 1970s by introducing an ideological innovation and the knowledge for liberation to Oromo society has challenged the underpinnings of Ethiopianism and nafxanyaa philosophy that have provided the justification for the abuse of Oromo humanity and identity, liberated the minds of millions of Oromos, and mobilized them to struggle for their freedom and liberate their country from Abyssinian/Habasha domination.

Consequently, the flourishing of national Oromummaa (Oromo national history, culture, and nationalism) and the consolidation of Oromo unity as demonstrated by the recent Qeerro/Qarree movement have revealed the potential of Oromo society to bring about fundamental transformations in Oromia, the Ethiopian Empire, and the Horn of Africa. In disapproval and objection to the development of Oromo political consciousness and  national Oromummaa, the neo-nafxanya government of Abiy Ahmed and all external and internal enemies of the Oromo national struggle are currently attacking Oromo nationalists in general and independent Oromo political organizations such as the OLF and the Oromo Federalist Congress (OFC) and their key leaders, members and sympathizers in particular in order to deny the people the institutional and organizational capacity, which is absolutely necessary to empower the Oromo nation. The main objectives of the neo-nafxanayaa government and its collaborators are to continue disempowering the Oromo people by dispossessing their lands and other resources and by keeping them in the status of colonial subjects, who are disorganized and easily terrorized and dominated.

The recent ideological and intellectual victories of the Oromo national movement have disturbed the neo-nafxanyaas and their government. They are worried that they cannot successfully implement their grand plans for dismantling Oromia and Oromo nationhood/peoplehood. Their strategies are to fragment the Oromo nation into local and religious identities, partition Oromia again into colonial administrative regions, reimpose Habasha/Amhara culture and language, and to continue looting Oromia resources. The OLF and OFC have become the main obstacles to these grand schemes while some Oromo organizations and former politicians/activists are willingly becoming the agents of the neo-nafxanyaa government to satisfy their personal interests at the expense of the Oromo nation. Currently, Abiy and his government are trying to dismantle the independent leaderships of OLF and OFC and replace them by a subservient leadership that will be commanded by the neo-nafxanyaa government. They do this to continue Habasha/Amhara hegemony and to securely institutionalize Ethiopian settler colonialism and its nafxanyaa system.

In its attempt to destroy or diminish the Oromo national movement and its organizational infrastructures, Abiy and his government have developed and used four main political and ideological schemes.

Preemptive political crimes have been concocted and implemented to enable the PP to win the upcoming elections and keep Abiy in power. Above all, Abiy’s security infrastructure has detained most of the known OLF leadership to make it a marionette of PP or to simply destroy it.   When these efforts failed, the government sponsored the creation of what is now called the Hilton group, a renegade group corrupted from the ranks of the OLF that takes its orders from Abiy’s government. The fact that the Abiy government is now calling for a general election is clear evidence that COVID-19 was not the reason for postponing the May 2020 election. If that was the reason, the government does not reverse the decision now when COVID-19 is more prevalent. The true intention for illegally and unconstitutionally postponing the election was to weaken formidable political opponents so that Abiy and his party can declare victory by running against themselves, as they did in the 2015 sham election.

The declaration by agents of the government of Ethiopia and the neo-nafxanyaa media outlets that the chairman of the OLF was replaced by his deputy chairman was intended to spread confusion and to demoralize the Oromo people and promote the renegade group. Overall, the assassination of Hacaalu and the attack on the Oromo people and their leaders have renewed the commitment of the people to intensify the Oromo national movement in Oromia and the diaspora. Ongoing rebellions, economic boycotts and shutting down of highways are clear examples. The Oromo diaspora has come out in en masse in support of the Oromo struggle in Oromia by engaging in series of demonstrations and by engaging in public diplomacy on behalf their people. The demand to release all political prisoners and to abolish command posts in Oromia with emphatic support for the Oromo Liberation Army have dominated Oromo medias and other media outlets.

Our people, while aspiring for the liberation of their society and country under such dire conditions, must know that they need independent political organizations that lead their national movement through the rough roads ahead. Consequently, while engaging in different political activities, they must consider the following. 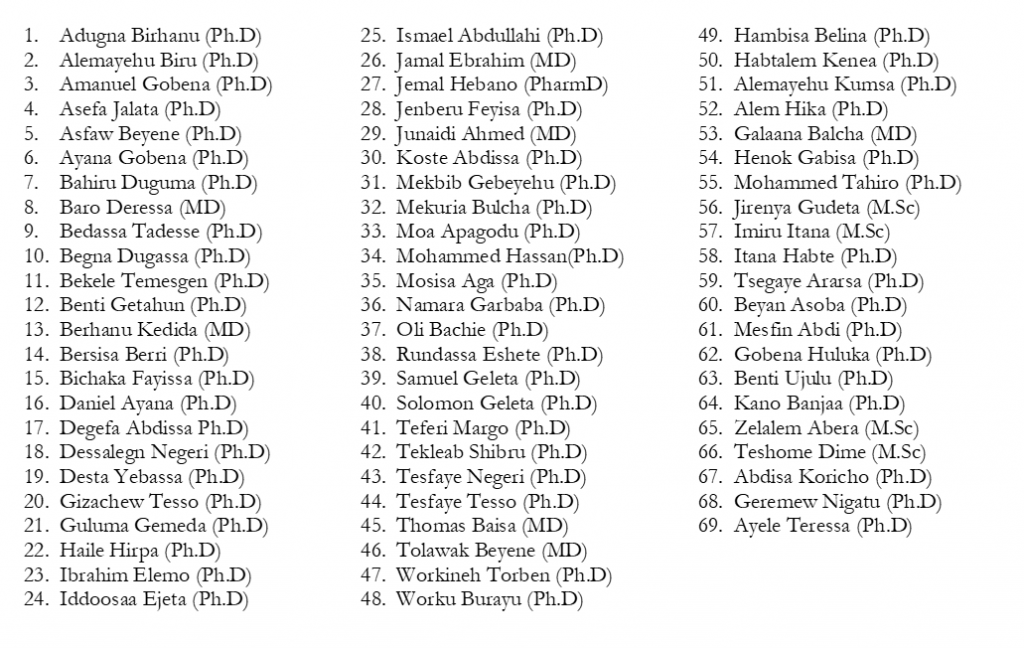