RE: Your article “Hate Speech on Facebook Is Pushing Ethiopia Dangerously Close to a Genocide” 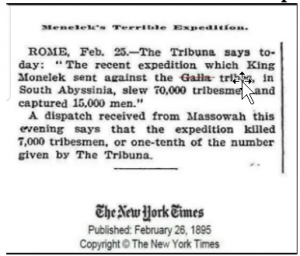 The undersigned members of Oromia Global Forum (OGF)[1] are deeply concerned and extremely disappointed with your article “Hate Speech on Facebook Is Pushing Ethiopia Dangerously Close to a Genocide.” We are not disputing the accuracy of the headline. We are horrified by the article’s content that blames the victims (Oromo) for the crimes the Ethiopian regime and its Neftegna[2] supporters are committing.

What you referred to as “volatile Ethiopian politics” did not start in 2018, your reference point. Instead, it began with Menelik II’s empire-building adventure in mid-1980s. The adventure entailed mass murder of genocidal proportion and mutilations of citizens to incorporate the free southern nations, including the Oromo, into the Ethiopian empire, according to the NY times (see box) and several other publications[3],[4],[5]. The empire subsequently imposed the ruling class language (Amharic) and religion (Orthodox Christianity) as the only national language and religion respectively. Besides, the imperial government also instituted a racist land tenure system. In the incorporated southern states, they instituted and fostered expropriation of the indigenous people’s ancestral lands.  The expropriated lands were then distributed among the Orthodox church and expeditionary armed imperial forces, also known as Neftegnas[6].  By contrast, in the northern states home of the ruling class, the system allowed  the transfer of land only by lineage or inheritance. These racist policies effectively relegated Oromos and others in the south to impoverished subjects. At the same time, it conferred unprecedented privileges on the Amhara ruling class and the clergy, triggering the mushrooming of liberation fronts. That is what is fueling what you characterized as “volatile Ethiopian politics”, not Facebook.

During the armed struggle, the regimes in power (Emperor Haile Selassie and the Military regimes) did everything they could to destroy the Fronts, off and on the battlefield. They bombarded them from the air and land. They portrayed them as killers, bandits, terrorists and separatists. They used diplomatic tools to enlist the cooperation of neighboring countries to isolate them. Eventually, though, they couldn’t deny them victory. At the end of the armed struggle in 1991, Eritrea declared independence and exited the empire.[7] The remaining Fronts established a multi-national Federal system of government and ratified a new constitution that guaranteed the right of nations and nationalities to self-determination.  The new constitution empowered all nations and nationalities to develop and use their respective languages and cultures for the first time in the country’s history after Menelik II incorporated them into the empire.

Unfortunately, the militarily and politically stronger TPLF gave lip service to the federal system and the new constitution’s supremacy, ruling de facto as a tyrant. It used hand-picked nations and nationalities representative political parties it created (not elected by the people they claimed to represent) to establish a new allied Front named the Ethiopian Revolutionary Democratic Front (EPRDF). It ruled the country as a dictator for 27+ years. The TPLF dominated EPRDF alienated Oromo’s true representatives, the OLF and Oromo Federalist Congress (OFC)[8], relentlessly terrorized the party leaders, members and supporters, and used  federal power and intuitions it controlled to loot the country, especially Oromia, with impunity.[9] It used all media outlets it commanded to crucify the party and its supporters in public court as terrorists, extremists, and larcenists; the same allegations its predecessor levelled against all the fronts, including itself. Sounds familiar?

The TPLF dominated EPRDF regime’s decision to engage in massive expropriation of Oromo lands, purportedly to expand the capital city territory and lease it to foreign and domestic investors by evicting Oromo farmers broke the camel’s back.  It sent millions of Oromo youth or Qeerro/Qarree to the street on peaceful demonstrations in 2015[10]. The popular Qeerro/Qarree (Oromo youth) uprising that also attracted youth from the other regions finally forced the TPLF to retreat to Tigray; handing over power to the remining members of the EPRDF with Dr. Abiy Ahmed as a new Prime Mistier in 2018, your reference point.

The new regime introduced several reforms. It released all political prisoners, invited exiled opposition politicians to return home to participate in peaceful democratic process, and promised to repeal repressive laws[11],[12]. For Oromos and the forcibly incorporated nations and nationalities, these changes offered a flicker of hope to build a more perfect union of equals.   Unfortunately, a year after the change was introduced, the return of the exiled opposition politicians and parties seems to have revealed something the new regime did not expect. The overwhelming popular support the resident (OFC) and returning (OLF) opposition political parties received and the respect and trust their politicians and leaders commanded undouptly scared the rulling party; as demonstrated by the unprecedented turnout of Oromos in millions to receive their beloved Oromo Liberation Front (OLF) and its leaders[13] and millions that flocked to OLF and OFC political rallies. Consequently, the regime abruptly began to decelerate the pace of change it introduced.  Using COVID 19 as an excuse, the regime postponed regional and national elections. The Prime Minister vowed to revise the constitution, admittedly concerned with article 39 that guarantees the nations and nationalities right to self-determination. He alleged, without any evidence, the provision risks the country’s fragmentation. He has openly suggested to reintroduce Amharic as the official language of the country and he is busy spending millions of taxpayer’s dollars to rehabilitate the history and statues of the deceased emperors the incorporated nations and nationalities prefer to forget as the horror those emperors inflicted on them are still fresh in their memories.

The Prime Minster does all these admittedly to take the country back to what he calls its past imperial glory of pre 1974, a glory that only Ethiopia’s ruling class, the Amhara-elites and/or Neftegnas[14] lived. As recent as September 9, 2020, in an interview he granted to one of the Neftegna  Television Stations, Zehabesha, the Prime Minister made startling revelations. He told the host about his mom’s prophesy that he will be the 7th King of Ethiopia, and that he grew up knowing he was going to be a prime minister of Ethiopia, and that he has already confided this to his predecessors, and that his Prosperity Party will certainly win any time an election is held in Ethiopia.[15]

It goes without saying therefore that, it is the convergence of the interest of the regime and its supporters and their determination to jointly destroy the Oromos that they perceive stands between them and their dreams that is pushing the country dangerously close to a genocide. In fact, genocide is already being committed by the regime’s military Command Posts deployed in strategic locations throughout Oromia. The armed men and women in uniform stationed at these command posts are already conducting rampant extrajudicial killings, torture, setting peasant huts and crops on fire, raping women and children, and incarcerating Oromo opposition parties’ (OLF and OFC) leaders, members, and supporters[16],[17].

Simultaneously, in a highly coordinated fashion, the regime supporters have established numerous online news media platforms and social media accounts to flood the cyberspace and airwaves with bogus allegations, hate messages, and misinformation. They falsely allege “Oromo extremist”, “Oromo narrow nationalists”, “Oromo Muslims”, and “Oromo Qeerro” etc. “are killing Christians in Oromia.” Unfortunately, unsuspecting analysts like you have unwittingly colluded with these criminals and amplified and disseminated their hate messages and unfounded allegations.

Your article begins with a contradictory narrative about the assassinated famous Oromo Artist, Hachalu Hundessa. First, the article suggests Hachalu always “sang about love, unity, and raising the marginalized voices of his Oromo ethnic group“. Immediately after, it asserts he was blackmailed into becoming political by Oromo activists such as Jawar Mohamed. Speaking on behalf of a marginalized people is obviously political. Mr. Hundessa has never been blackmailed to take a position contrary to his beliefs, nor did he start singing political songs after Mr. Abiy became a Prime Minster as your source would like your readers to believe. In fact, at the age of 17, “the singer was imprisoned lasting five years for his political activities in 2003; according to BBC[18].

Your source “How a musician’s killing exposed the media in Ethiopia” by Getachew Tamiru is clearly part of the Neftegna team masquerading as point of view publishers, disseminating the regime’s propaganda. His entire article is devoted to viciously attacking Mr. Jawar Mohamed, echoing the same government campaign. He describes Jawar as an Oromo nationalist responsible for all the instability, insecurity, and extrajudicial killings in that country. Nothing is further from the truth than this bogus allegation. Jawar is an activist who turned a politician. His adversaries/enemies hate him because, for the first time in Ethiopia’s history, he created the first successful private Oromo media house, the Oromia Media Network (OMN) that broadcast in Oromo language. He used the platform to create awareness about Oromo history and politics from his HQ in Minneapolis. He also effectively used the platform to mobilize Oromo youth movement that toppled the TPLF regime, paving the way for Dr. Abiy and his team to come to power. The Neftegnas, Oromo, Amhara and other oppressed nations loved him for that. He became an instant celebrity. Dr. Abiy and his inner circle loved him too, then. They invited him to open an office in Ethiopia, and he did. He visited all the regions of Ethiopia, and no one remotely sought to hurt him. Then he decided to Join an opposition Oromo party. As his grassroots support base began to swell, the relation between Jawar and the regime soured.

When Jawar toured the United States, Canada and Europe early this year, the regime supporters followed him everywhere, threatening to kill him. In all the countries he visited, the host countries provided him with full security protection, an arrangement that avoided his possible assassination. On his visit to Atlanta, a Neftegna American wielding a handgun and live streaming from his car, his plan to kill Jawar was arrested by Atlanta police as his live streaming was in progress. What is a better clue than this to determine who Killed Hachaalu; another prominent Oromo using his platform to demand justice and equality for his people.

Soon after Hachaalus assassination, the shameless Attorney General of the regime blamed OLF for the assassination. She hasn’t told her Neftegna media representatives why a party would have its most vocal supporter killed? What is a bigger hoax than this? What is even more fascinating is that, as soon as she began the Oromo language announcement following the announcement in Amharic, the entire Neftgena press left.

This left the Attorney General standing alone in humiliation.  The event displayed unequivocally their unprecedented hate/contempt they have for the Oromo people! According to the Economist of 9/19/2020[19] “an estimated 239 people were killed, some by mobs, others by security forces, following Hachalu’s assasination. Thousands have since been arrested, including Jawar Mohammed, an Oromo opposition leader considered Abiy’s main rival, who is accused of inciting violence.”. This is the regime’s hack job or political propaganda that you and your sources are reproducing and disseminating.

The regime and his supporters first attempted to assassinate Jawar in Addis Ababa[20] but failed.  And of Course, following the assassination of Hachaluu, they eventually jailed him, closed his OMN, and confiscated the Network’s properties, not because he or his Network incited any violence but because he joined an opposition party and called for a free and fair election.  Contrary to your source’s assertion that major Oromo media outlets are disseminating hate speech, it is the regime funded Neftegna’s media that are relentlessly producing and disseminating hate propaganda attacking Oromos while the regime is conducting extrajudicial killings, burning of homes and destroying the properties of Oromos throughout Oromia [21]. We the undersigned GOF member organization thus request you to carefully review the hard evidence we provided that  establishes how your article unwittingly blamed the victims for the crimes they endure and not only withdraw the article but also apologize to the Oromo people that are irreparably adversely impacted by your article.